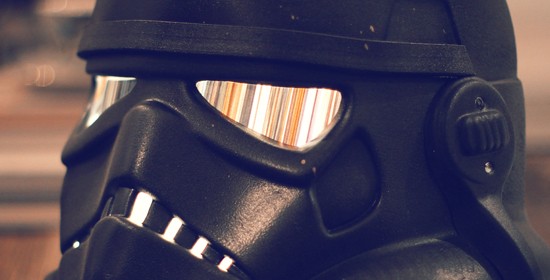 Art lovers and pop culture fans have a real treat lined up at this years’ Middle East Film & Comic Con with the ‘Art Wars Dubai’ special exhibit commissioned for only the 2nd time globally as a part of Dubai Art Season 2014, the city’s umbrella arts initiative launched by the Dubai Culture & Arts Authority (Dubai Culture), the Emirates dedicated Authority for culture, arts, and heritage. Art Wars Dubai involves 20 UAE based artists applying their creative flair and individual styles to customise the classic Storm Trooper helmet made famous in the Star Wars films and as a pop culture icon ever since. Yasemin Richie’s Stormtrooper helmet, entitled ‘Into My Eyes You Must Look’ and featuring A Storyline inspired by Empire Strikes Back, is part of the Art Wars exhibition currently in Dubai. The exhibition showcases the work of 20 UAE based artists, and a Stormtrooper helmet, estimated to be worth $100,000, designed by Damien Hirst. The original exhibit in the Saatchi Gallery in London was organised by Ben Moore as a charity project in collaboration with Andrew Ainsworth of Sheperton Design Studios, who has worked on over 70 feature films and was the original prop designer from the first film ‘Star Wars: A New Hope’. The exhibition is in the Bloomingdale's - Dubai Atrium at The Dubai Mall until 30th March when the display will move to Middle East Film & Comic Con (MEFCC), with all the pieces being auctioned on the last day of Comic Con. MEFCC 2014 runs from 3rd-5th April at the World Trade Centre, Dubai. For more info: MEFCC - http://www.mefcc.com Art Wars - http://artwars.net Time Out Dubai - http://whatson.ae/dubai/knowledge/9245/dubai-mall-to-host-damien-hirst-stormtrooper-helmet-unveiled-art-work/#gallery-1