The Union Jack in Fashion

The Union Jack - a glorious symbol of the harmonious unity between England, Ireland, Scotland and Wales or the ever present reminder that the English invaded, killed, conquered and controlled the surrounding territories?

In the United States the people treat their flag with pride and respect. Teenagers stand to the sing the national anthem at their graduation while gazing at the flag in awe and the elderly dutifully wake at the crack of dawn to rise the flag in their front garden. Across the pond, in the United Kingdom, we are told that displaying the cross of St. George in our windows during the Football World Cup is racist. The Union Jack has been used in the UK by racist right wing groups and a symbol of their white supremacist ideals. 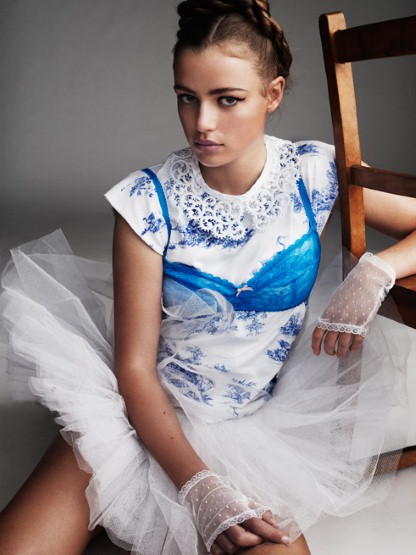 To celebrate 10 years of sponsoring emerging designers at London Fashion Week earlier this year, Topshop invited their NEWGEN alumni back to design a capsule T-shirt collection.

When the Royal Wedding was announced  the British public became fascinated with romantic notion of a average middle class girl meeting a prince, marrying and living happily ever after as his beautiful queen. In the weeks leading up to the wedding we saw an increase in royal wedding merchandise alongside the novelty Union Jack flag.

Alas, the day of the Royal Wedding arrives. No one could avoid the scenes outside Buckingham Palace. It was a sea of Union Jacks being waved by happy, excited faces from all walks of life.

On this day British people were ‘allowed’ to wave the Union Jack with pride! Suddenly it was alright to say ‘I’m British and proud’.

These scenes outside Buckingham Palace, the Queen's Diamond Jubilee, and the up and coming London Olympics has had an influence on the high street. From Accessorize to Zara, who have Union Jacks printed on T shirts, earrings and necklaces to Topshop who have taken a more subtle approach with Tees inspired by British Culture.

This look can be a difficult look to carry off. I have to admit it is something I have avoided. I tried on a chiffon Union Jack tee from Zara and I felt like a hardcore Athletics fan at the Olympics Games. All that was missing was a Union Jack painted on my face and a banner reading: Britain for Gold!!!

The trick is to start off with subtle little touches. Accessorize have cute necklaces with iconic British charms like a Double Decker red bus and Big Ben. Nail art is always a good place to start. If you don’t want to paint the union jack on each of your finger nails you could embrace the different colour on each finger look using red, white and blue.

If you’re bold enough to skip the subtle touches be sure not to go Union Jack overload. This chiffon Union Jack tee from Zara (below) would look great with a pair of black skinny jeans and a leather or denim jacket. Always keep the rest of your outfit simple to avoid looking too messy. The Union Jack deserves everyone’s full attention.

Whatever look you go for be sure to rock it with pride. Chin up, cuppa tea in hand and a stiff upper and don’t forget that dry sense of humour. We can finally say we are British and proud!